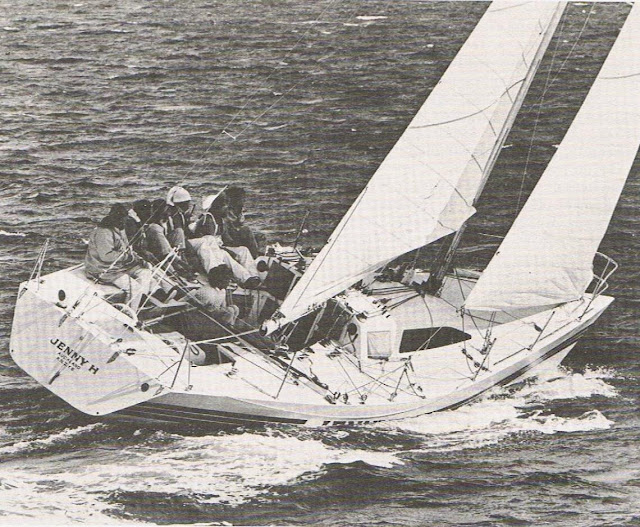 Farr 38 1977 IOR One Ton racing sloop. Originally Jenny H. Built by Robertson Bros., in New Zealand. Jenny H, first owner Ray Haslar. One of New Zealand's top racing sailors and yachtsman of the year. Jenny H was New Zealand's racing yacht of the year in 1978.  She won the World One Ton Southern Cross Cup for New Zealand in 1978. In the 1977 Sydney-Hobart race, she was 5th on elapsed time, 2nd in class, and 7th overall out of 131 boats in a year when only 70 boats finished the race.

She came to California in 1978 following successful completion of the Sydney Hobart race. Renamed Scalawag and seriously raced by second owner John Kilroy. Successfully competed locally, nationally and internationally with John Kilroy, famous for Farr 40 and TP 52 racing. Winner of two LA to Honolulu  TransPac races. During the Kilroy era he commissioned America's Cup designer, David Pedrick of Sparkman and Stevens, to design the fixed keel for this boat, replacing the lifting centerboard.

Azzurra competed in the 2011 Newport to Ensenada race finishing 6th out of 14 in class with an all rookie crew - all new sailors who had never raced before.

Re-fit and maintained by a meticulous, knowledgeable owner and the World Sailing Foundation .The hull and keel were stripped to the epoxy level, faired, sanded and faired again. The bottom was spray painted with Interlux Baltoplate. The topsides, deck were professionally prepared, painted with Awlgrip 2. The mast and boom were prepared and spray painted in a booth by concourse automobile restoration shop.  The internal mast hardware is all new fabrication - custom made light weight aluminum pulleys, with bronze oil lite bushing, custom made titanium pins and end plates and  titanimum cleavis pins for the spreaders.  The mast head light is LED and operates on a photo cell. The stern light is a new Orca LED.  New Airmar ultrasonic speed sensor  (not paddle wheel) and new Airmar depth sensor  and titanium spreader pins.

Interior:
Minimalist light weight for racing. Completely open and empty except for port side "chart table, starboard side wooden surface with small storage area below, port and starboard cushion settees suitable for sitting or sleeping with storage underneath, 2 pipe berths aft of the gangway. No head. Sometimes we carry a porta potty. Wonderful day sailing yacht with capability for over night staying aboard at a slip or anchored.

at the Portofino Hotel and Marina, California

After 17 years of enjoyment and adventure, racing and pleasure sailing  Azzurra is available for a new captain and crew. During these 17 years hundreds of friends, guest crew, racers and many adventures. 2004 the boat was entirely stripped, renovated, re-fit, including much new hardware. New paint and varnish everywhere. Receipts and photos in abundance.
In 2014 Azzurra was hauled out for complete bottom and topsides prep and repaint.